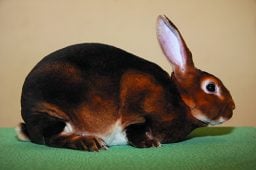 The first rex rabbits were created in 1919 from a litter of cross-bred Belgian Hares. The breeder was a French Abbe, M. Gillet whose short and silky haired brown rabbits eventually became recognised as Castor Rex – Castor from the Latin for Beaver or brown, and Rex – Latin for King. In 1924 five of Gillet’s Castor Rex were exhibited at the Paris Show and two years later Lady Layland-Barratt imported them into Britain where breeders were soon producing a variety of colours by crossing Castors with fur and fancy colours and patterns.  Sixty five years later an American fancier Mona Berryhill of Texas produced a miniature version which took the rabbit world by storm. Intended to be a standard rex rabbit in every way possible except in size, the Mini is popular as both an exhibition or pet. Both categories have achieved many successes at the leading shows. The fur to be short, firm and plush like with a well proportioned graceful body and a bold, broad head. Fur to be approximately 1.27cm in length, free from any projecting guard hairs.