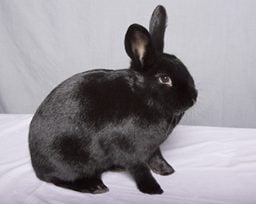 Introduced into the UK 1972.
The Alaska existed in France in the 1920s but weighed only 2kg. A similar breed – called the Nubian – was being bred in the UK around the same time but became extinct in the 1930s. The present Alaska rabbit was introduced from Belgium in 1972 and is one of our most successful fur varieties.