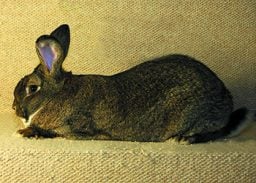 Introduced into the UK Early 1960s
In the late 1940s breeders brought in other colours of Flemish Giants from America and set up a national breed club to cater for a British variety. The first British Giant rabbits were created by Richard Kirk and exhibited at Alexandra Palace in the early 1960s. Later several colours were recognised but this gentle giant soon lost favour with exhibitors and its national breed club was disbanded in 2014.