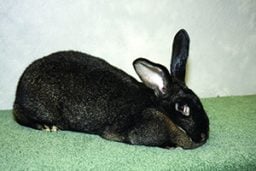 Introduced into the UK Early 1870s
Originally discovered in Belgium as a sandy coloured giant rabbit, the Flemish Giant enjoyed its first win in 1886 at the Crystal Palace. The present steel-grey Flemish was created by Christopher Wren of Hampton Wick  during the period before the 1914-18 war had won many major awards.