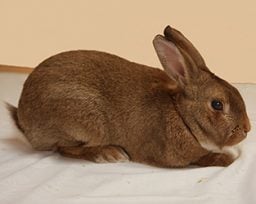 Introduced into the UK 1927
Created in this country, the original Glavcot was the Silver which although never standardised led to the creation of the Golden which in 1934 was accepted by the BRC. Medium sized, mandolin shaped and fine boned, both colours became extinct. The Golden was recreated by J Irons in the late nineteen sixties, but remains extremely rare.