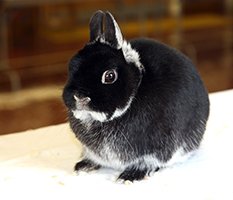 Introduced into the UK 1950
Developed in Holland from the Polish rabbit imported from England in the late 19th and early 20th centuries, breeding was halted during the 1939-45 war when Germany occupied Holland and it was not until 1950 that the breed was introduced into the UK. It has become one of our most popular and successful fancy breeds.