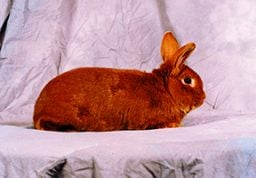 Introduced into the UK Early 1980s
Developed in the Netherlands by crossing fawn rabbits with Tans, the Thrianta was recognised on May 1 1940 just days before war was declared in that country. A breed that has enjoyed much success at the UK shows, leaving the Rare Varieties Rabbit Club to form its own national club in 2011.