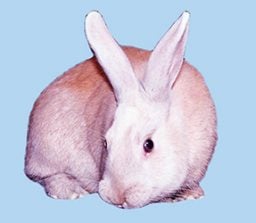 Introduced into the UK Early 1980s
A British breed created by the late Hugh Halliday in the early 1980s who wanted to produce an all yellow rabbit and used many crossings of fur breeds including the Silver Fox and Havana until by 1994 they were breeding true and a standard recognised. The original Wheaten was followed by the Wheaten Lynx.